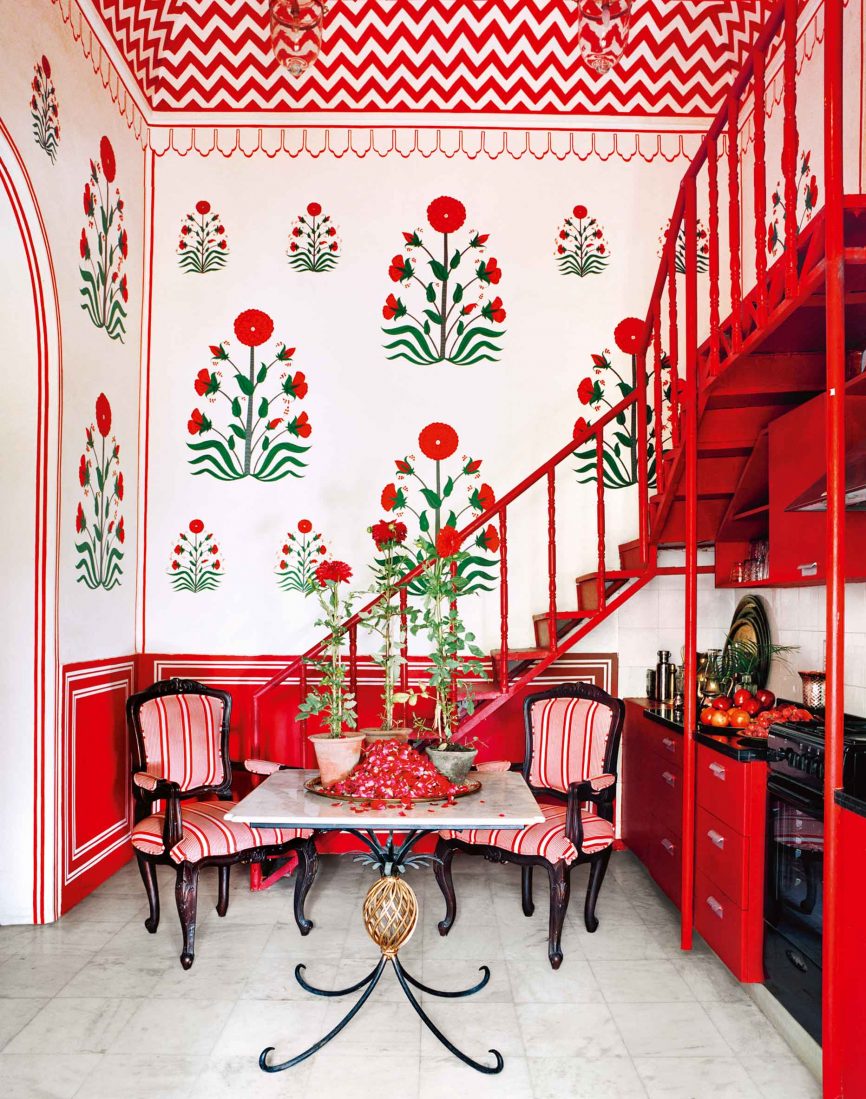 Rajasthan is an Indian marvel of heritage and culture. With a bright, colourful mix of tradition and royal appeal, the Rajasthani interior design grabs the attention of some of the most successful interior designers across the globe. From exquisite handicrafts to beautiful local furnishing styles, the Indian traditional interior design presents a plethora of affordable elements for all types of homes. To this date, Jaipur homes feature the warmth of nostalgia and luxury.

In this article, we are featuring four stunning Jaipur homes that showcase exemplary interior design:

Celebrated mainly as one of the most important treasures of Jaipur’s cultural heritage, the restored palace is a balanced mix of traditional aesthetics, maximalism and sophistication. The 18th century Mughal and Rajput interior design elements give it a distinct stunning old-world glamour.

The pink Art deco facade bears 14 royal apartments, suites and palaces which were parts of the royal residence. Ram Niwas, the apartment for the Maharaja serves as Padmanabh Singh’s part-time residence when he visits the region.

The interiors from Adil Ahmad give a characteristic feel of the 1930s art deco-inspired from Rajput and Mughal jaipur homes.

This project from the French jewellery designer Marie-Helene de Taillac got spell-bounded when she came across this beautiful palace, The Narain Niwas Palace in the late 80s on a trip. The colourful atmosphere of the city made her fall for the pink city.

Having a helping hand from the Dutch Interior designer Marie-Anne Oudejans, she personalised the suite according to her taste.

The fantastic colour palette of the suite makes it one of the chromatic wonders in the world. Crafting the stunning interiors with her signature shade, powder blue, dominating the palette, Taillac freely experimented around.

Some of the furnishings include pieces from Paris. However, most of the elements in the design scheme are commissioned in Jaipur. The ridiculous ease of access to some of the top-notch decor at reasonable prices only increased her love for the subcontinent!

This home from the designer couple, Nur Kaoukji and Livio Delesgues, is one of the many apartments inside a confined complex.

With a high ceiling space taking over 3500 ft, the area features two bedrooms with separate terrace and bathrooms.  The spacious living room and kitchen are filled with decor from Kaoukji’s brand, Ecru. With Indian and middle-eastern antiques and furnishings designed by the couple taking over the visual field, the home has a bizarre mix of styles and textures that undoubtedly go exceptionally well.

Personalising the suite according to her taste, she hired local artists to create the Mughal style flower murals with gold mirrors and added locally-commissioned block printed linens.

The room features canopy styled beds and ceilings that give an impression of tents. Oudejan’s admiration for tents is reminiscent of her grandmother’s love for the style.

The colourful expression of the Rajasthani interior design attracts the attention of the interior designers and decorators. In the present day and age, despite the rise of minimalistic and modern interior design, the sweet touch of luxury and nostalgia in the traditional interior design styles create a timeless design scheme that is never becoming irrelevant anytime soon!