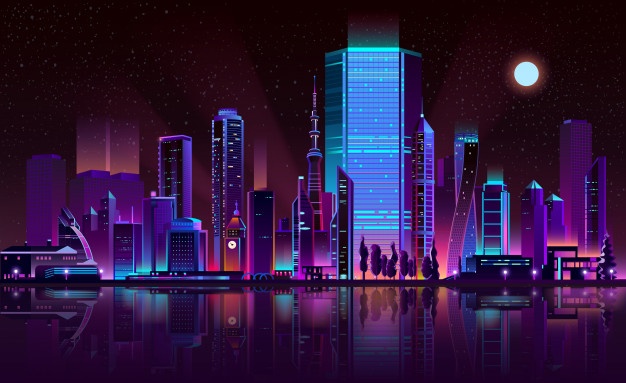 Neon lights are increasingly becoming popular owing to their use in contemporary pop culture. With a soothing aura tied with a vintage outlook, the neon lights are capable of making significant improvements in any architectural space or structure. Despite being used so diversely throughout the world in different sectors, neon lamps are still often neglected by architects. This neglect is the result of the overtime association of neon lamps with commercial signs. From billboards and subways to clubs and restaurants, we see neon lighting everywhere. This is an article devoted to the workings, history and the immense architectural potential of neon lighting!

It all began in 1898 with the discovery of a noble gas. It was called Neon, which came from the Greek word “Neos” meaning “the new gas”. Like other noble gases, it was found to be odourless, colourless and inert under standard conditions. But when placed in an electric field, emits an orange coloured glow.

Soon word spread around among the scientific community and the first neon lamp sprung into existence in 1902 owing to the efforts of an engineer and chemist Georges Claude. Glass tubes of four to eight-foot lengths were filled with neon or other gases and applying a high voltage to this setup caused emission of light that would change the world of design forever! Customising these tubes with different tints and coatings produced different colours.

The year 1923 was when the commercialisation of neon lamps began with Georges Claude himself leading the charge. His company Claude Neon pioneered a new revolution of neon lamps that would, later on, be embedded deep in the country’s culture and aesthetic. From advertising to movie theatres, neon lamps started taking over the ornamentation industry one step at a time.

It was at that time that designers in America started adopting neon lighting in their methods. Douglas Leigh, the American advertising executive and lighting designer was one of the first to incorporate neon lightings. From being used profusely in the Chicago Century of Progress Expo of 1933 to the 1939 Worl’s Fair in New York, neon lightings quickly took over the commercial advertisements and became a signature of cities like Las Vegas.

At this point, the use of Neon wasn’t limited to American cities. From being first used in Paris (mainly in cinemas and clubs) to becoming popular in the Soviet and other eastern parts of the world, the neon lightings appealed to the whole world soon enough. For example in China, Chinese calligraphy decorated by neon lightings was soon starting to be seen in different parts of the country.

From its early history through the present day, neon has thus been deeply associated with modernity, a cosmopolitan lifestyle, and an atmosphere of vitality. Architects today can continue to use neon signage to invoke this milieu, whether through words, symbols, or abstract designs. To this end, neon lights pair well with sleek, modern interior design, such as in the images below of LYCS Architecture’s Mylines Hotel. The right symbol or phrase combined with the right complementing interior can bring the energy and vitality of the city even into a private room.

But the brilliance of neon lightings is not limited to old fashioned clubs and cinemas. In the 21st century, when combined with concrete, rustic bricks and plants, neon light can create an aesthetically appealing design that stands out from the competition!

Even with all the promises that neon lights come with, they remain neglected by a section of architects. This has to do with the overuse of neon for commercialisation and advertisements. This makes the architect think they don’t hold any appeal to be used in other types of projects. To this, Rudy Stern, a world-famous neon artist says,

“Unfortunately for many architects, neon is the last shoddy pink ‘pizza’ sign they have seen, and they summarily reject a medium that offers great promise as a spatial and environmental element.”

Therefore, the potential of neon lighting when used appropriately is immense even without any reference to vintage or aesthetic forms.

In the images of the With. It Home below, BodinChapa Architects have used neon in a non-representational way to create a stunningly memorable James Turrell-esque room that is serene and vibrant at the same time.

The use of Neon lights can transform a room significantly. The vibrant revitalizing appeal of neon lights appears to complement the interior space of the room.

For the architects who are willing to expand their capabilities and are smart enough to see the neon lightings being used for purposes other than advertisements and commercialisations, neon lightings open doors to a world of opportunities, transforming into able competent and skilled architects!