Let’s Hear from the Legend: B. V. Doshi 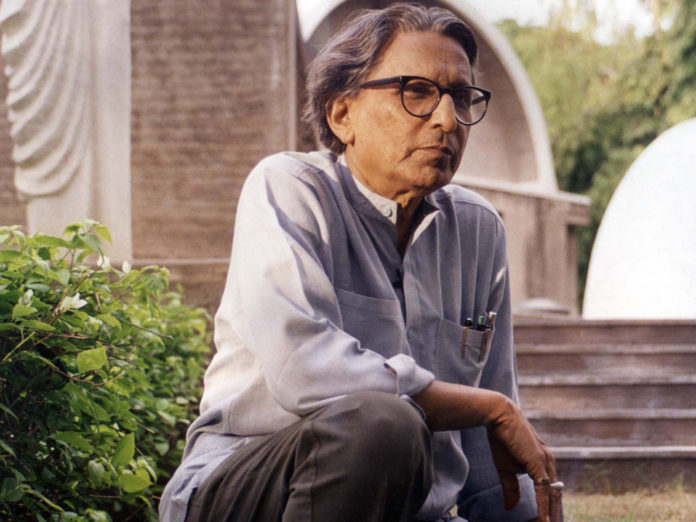 The name Balkrishna Doshi holds special significance in the context of Indian design. With 67 years of architectural practice, B.V. Doshi has become the face of the most venerated designs in the country. From revolutionalising architecture education to implementing global design practice in the Indian subcontinent, B.V. Doshi has led to massive improvements in the practice and teaching of his field.

Doshi has built hundreds of buildings and designed several educational institutions in the country. Some of the most prominent and successful architectural marvels are engraved with his name.

Surprisingly enough, the inspiration for design and architecture for him was not a result of some external guidance. The most vital source of motivation for Doshi was his own family who built furniture and increased the storeys of his house to accommodate the joint family. This situation formed a foundation for one of the most successful architects in the country. His core ideas happened to be increased reliance on local materials and the social changes affecting architecture and landscape.

“Architecture is just the backdrop to life.”

His frank experimentation with spaces and design led him to regard architecture as just a backdrop to life. Feeling the thrill of his profession was important to him. This passionate rendezvous with the craft has brought life to his work. Having an excellent foundation has helped Doshi aced the game. Time and again, he refers to the childhood that allowed him to mould ideas and excel in his career.

Having an innate connection with the environment and the campus, Doshi used to sit under a tree for classes. This connection is vital for a learning atmosphere and is seen in numerous educational institutions. It was important for people to feel the environment they live and study in, and this is what would bring familiarity and comfort to them.

One exciting analogy presented by Doshi goes like this. He likens architecture to an Indian meal. The meal, in itself, is diverse, but the consumption of each element depends on the person. There are no hard and fast rules or sequences to it. This philosophy showed up in his lecture at the Royal Academy of Arts in London where he pointed out his three principles for work, namely, “porosity, paradox and practice.”

One of his most successful works includes his office in Ahmedabad called Sangath. The building completed in 1980 stands till date as an architectural marvel completed with deceptive gardens and a peaceful ambience. Far from resembling a firm office, the building has the soothing appeal of a religious monument! This is what Doshi aspires to preach; Familiarity and comfort in the most hectic workplaces.

Following a distinct approach instead of staying on the cliched strategies has enabled him to thrive in a competitive profession for over six decades! In addition to his excellent practice, Mr Doshi has established various schools for architecture and design in the country and significantly influenced how architecture is studied.

With immense experience of working alongside some of the greatest minds in the profession, modernists like Le Corbusier and Louis Kahn, B.V. Doshi has turned out to be a prodigy in architecture during recent times. He reminisces the time he spent working alongside Le Corbusier and how he learnt the skill of realistically visualising buildings and the environment from him.

He later attained the highest level of appreciation in the profession by receiving the Pritzker Architecture Prize.